New York City is a much different place than it was 20 to 30 years ago. Previously filled with a lot of grit and many “no go” zones, it is now hard to find a neighborhood not filled with kids, playgrounds and luxury residences. Instead of ignoring their roots, many new residential developments in former industrial or “gritty” areas of New York City are embracing their neighborhood’s heritage with elevated design nods. Grit isn’t all bad and, often, makes for some interesting situations and inspirations (think of the Village punk rock music scene).

The following buildings took inspiration from their historic gritty roots and blend those touches with a modern twist. From old-school chicken wire glass to evoking old factories, these homes bring back historic grit to high-end living.

Morris Adjmi Architects
Architect Morris Adjmi exhibits a deft touch in taking inspiration from a neighborhood’s history and reinterpreting it with a beautiful modern aesthetic. Three terrific examples of this are his Austin Nichols House, the Sterling Mason and 55 W. 17th projects. 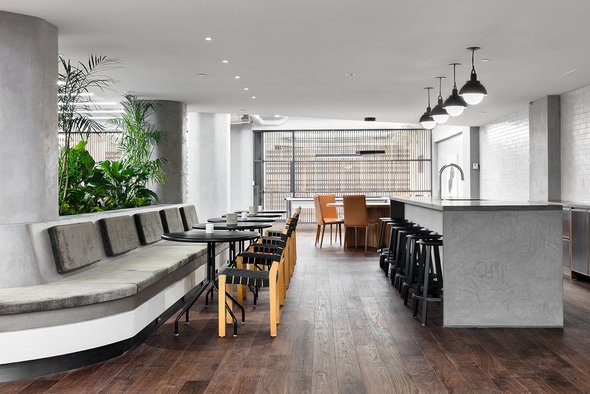 The Austin Nichols House, located on the once gritty East River waterfront,  is a restored and revitalized 1915 concrete warehouse originally designed by Cass Gilbert for the Austin, Nichols & Co., the one-time largest wholesale grocery business in the world and distributors of Wild Turkey bourbon. On the the National Register of Historic Places, Adjmi preserved the concrete finishes on the interior columns and used concrete countertops and honed Carrera stone finishes that evoke the original materials. The custom Shaker-inspired cabinetry echoes Gilbert’s original tall, narrow windows, while the tall 12-foot-high ceilings and herringbone oak floors recall its industrial past. 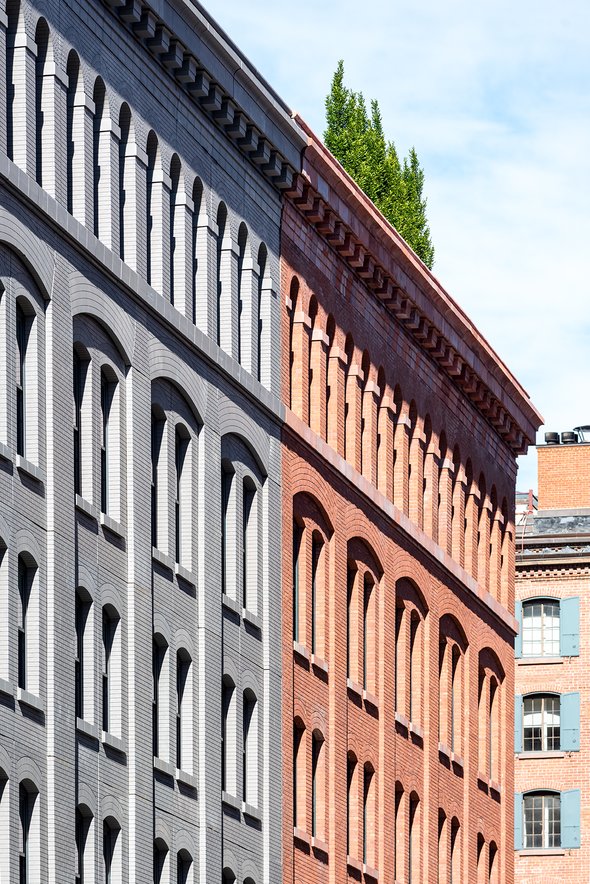 It is hard to imagine a time when TriBeCa was not a preschool heaven but in 1905, when the Sterling Mason was built, it was a completely different place. The Sterling Mason is a restored and renovated warehouse with a new metallic addition that duplicates every detail of the original masonry building in marine-grade aluminum and plasma-finished GFRC panels. Adjmi used materials and technologies of today to imitate the appearance of traditional construction methods which are reminiscent of using cast-iron to imitate stone. By using contemporary building methods to create a sense of historic continuity, the Sterling Mason invites visitors to reexamine the architecture of the city. 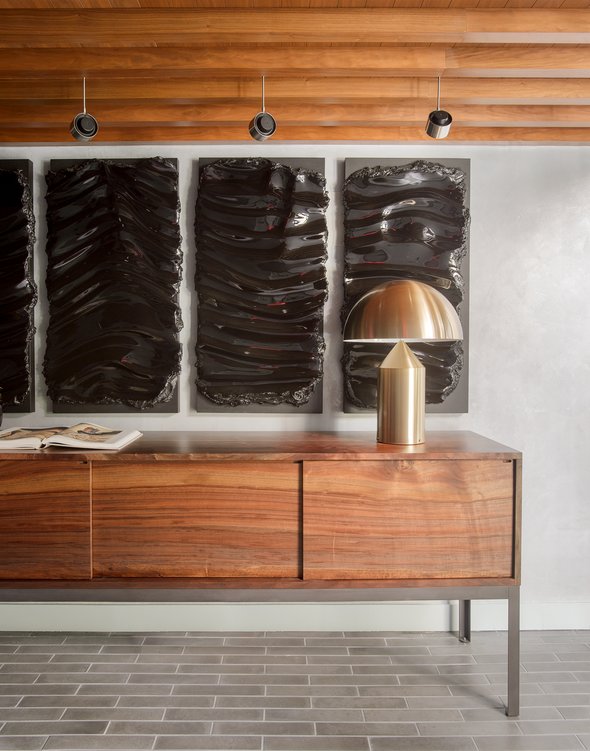 55 W. 17th balances its modern qualities with textured, handmade rough clay brick using traditional wooden molds. The brick evokes the historic masonry buildings found throughout the nearby neighborhoods of Chelsea and Ladies’ Mile. This is reinforced by the decorative bronze-colored panels distinguishing its first two floors. 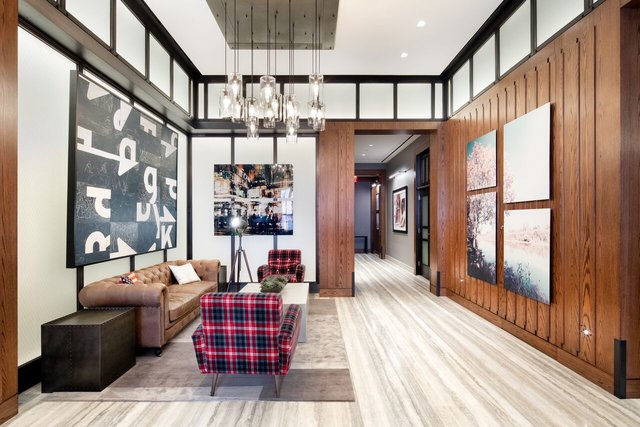 Designed by Robert McGinley Design, the interiors of new luxury rental building EVGB pay homage to its surrounding East Village neighborhood, known for its punk rock era, graffiti and selection of dive bars. A continuing theme throughout the building is the chicken wire glass that accentuates the public spaces from the ground floor lobby to the residential corridors harkening back to pre-war buildings such as industrial factories and firehouses. 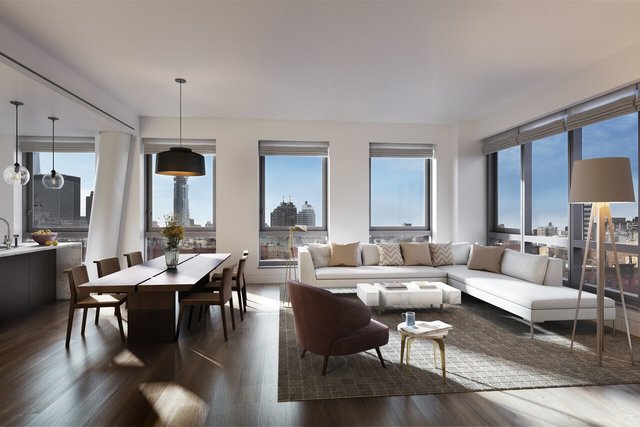 DXA studio was tapped to design the lobby, residential and amenity spaces at 242 Broome, the first condominium within Manhattan’s Lower East Side's Essex Crossing development. Here, DXA aimed to create interiors that merge the gritty quality of the Lower East Side with a residential experience that is elegant and refined. The team took inspiration from the building’s exterior and vibrant surroundings to create rooms that are not only sleek and livable, but also reflect the neighborhood’s character. The metalwork seen around the Lower East Side in the form of vault lights, diamond plate, storefronts and manhole covers became a source of inspiration for DXA studio, while materials such as patterned blackened steel and polished concrete are balanced with warm wood panels to envelop the public spaces. 242 Broome also features a champagne-colored façade of anodized aluminum—designed by SHoP Architects—that derives its warm color palette from the neighborhood. Inside, abstract geometric panels that echo the façade’s design are found on a lobby wall, as well as on casework in the entertaining lounge. 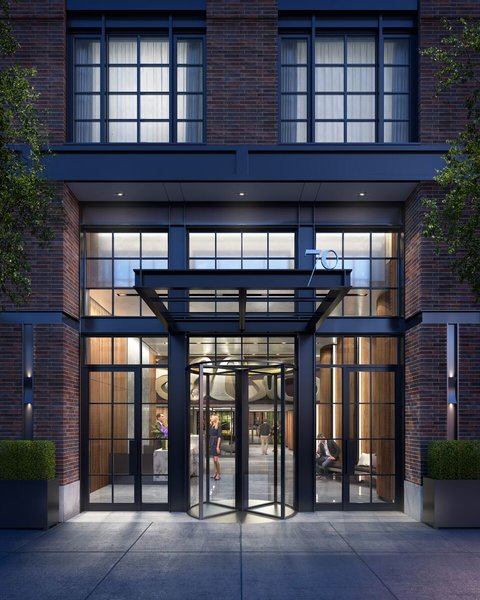 70 Charlton, designed by architecture firm Beyer Blinder Belle, took the surrounding Hudson Square neighborhood, once known as the printing district, into consideration when designing the luxury residence. The Hudson Square neighborhood, once dominated by large printing houses with oversized paned windows, brick exterior and steel accents, was rezoned in 2013 to accommodate residential growth. As a nod, the firm utilized masonry, metal and glass throughout the exterior and shaped the windows to emulate the industrial windows from the neighborhood’s bygone era. 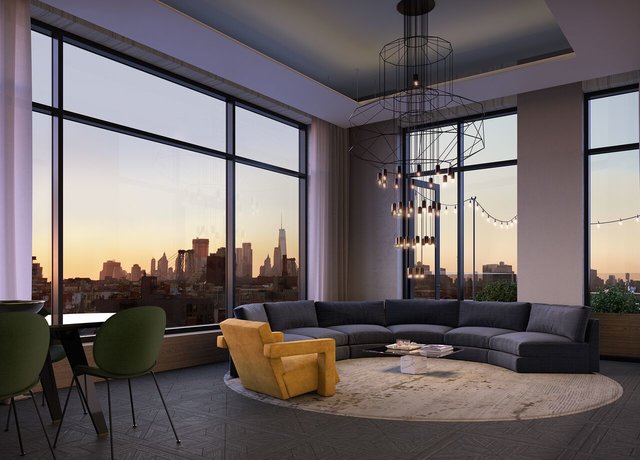 Inspired by the rawness of Williamsburg’s past, Isaac & Stern Architects, a New York-based firm with high-profile residential and commercial projects, crafted a distressed brick façade for the ground-up building which is located on the site of a former soap factory. The distressed look is offset by a herringbone pattern and modern metal panels that give the building its stately presence. Inside, the richly appointed interiors were designed by renowned designer Paris Farino, whose work includes the Gem Hotel in Chelsea and Steiner East Village. Farino says she designed the building to be an "eclectic balance of both modern design and the romantic, classic authenticity of the neighborhood." The result is stunning and serene residences, which feature elemental materials like stone and wood in intricate patterns and textures. 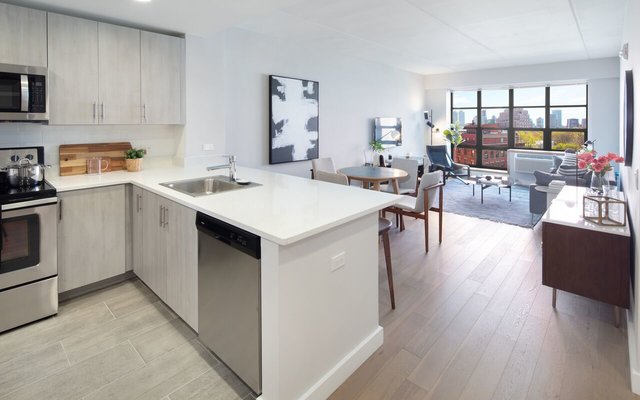 Designed by HLW Architects, Revetment House in beautiful and historic Hamilton Park, Jersey City, was built as an homage to the industrial roots of the neighborhood. Inspired by the history of its location atop a former railroad embankment once operated by the Pennsylvania Railroad, Revetment House offers bright and spacious residences that mix modern and industrial chic influences with features like large casement windows and open-floor plan kitchens. Every residence has its own in-unit washer-dryer, Whirlpool appliances, and high-end, contemporary finishes like white subway tiles in the kitchens and bathrooms and oak flooring.