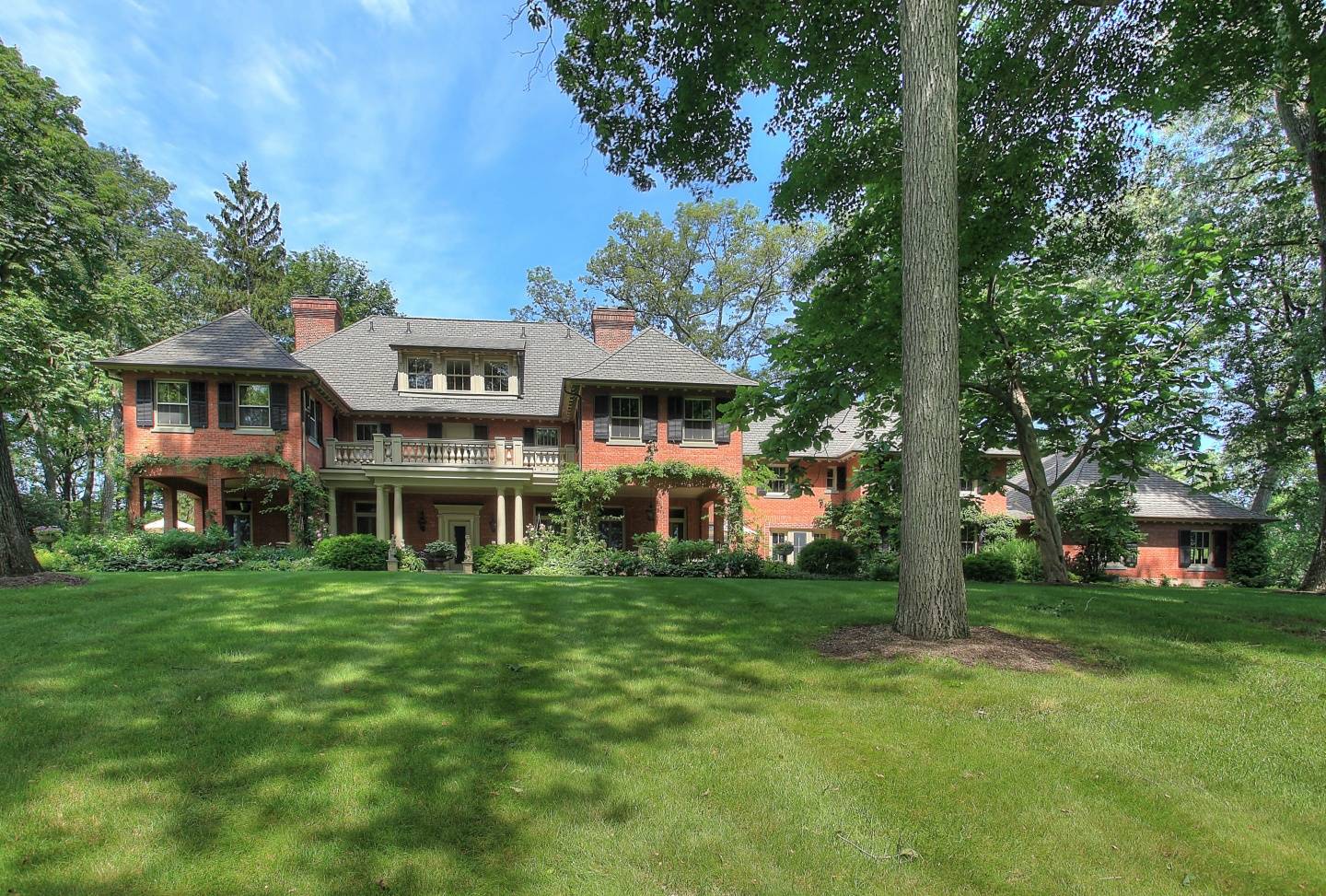 The site of California's oldest oak tree, this 2,600-acre ranch in the foothills of Cascade Mountains—set to be auctioned off with no reserve on September 25th—is home to a thriving agribusiness and vineyard, which produces about 2,000 to 2,500 cases of wine every season. 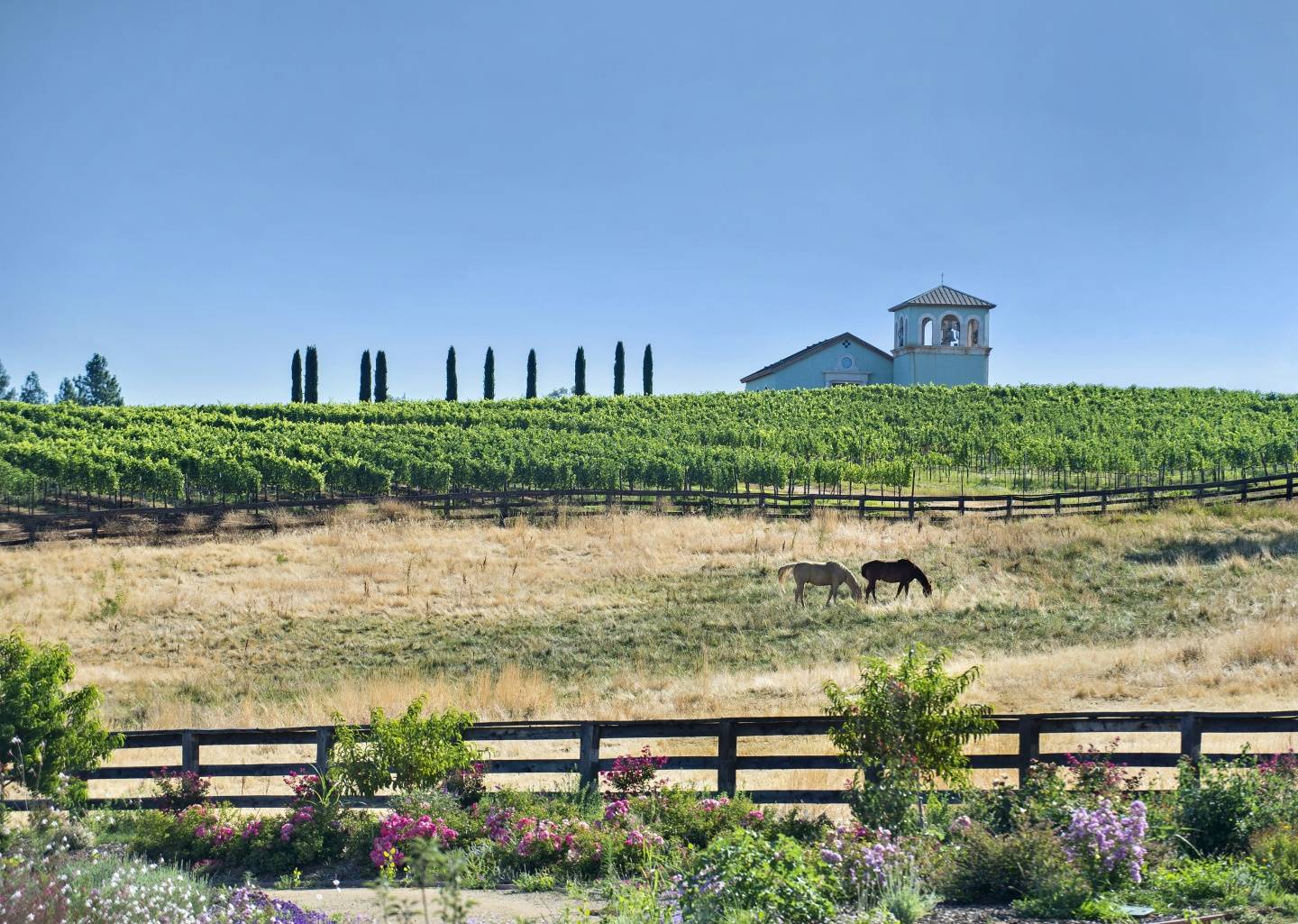 A number of buildings and venues sit on the sprawling property's grounds, including a two-suite bed-and-breakfast; a custom-built Romanesque chapel; a 200-seat glass conservatory/event center; a Mediterranean-inspired pavilion for open-air ceremonies; seven individual on-site residences, including the owner's main house; a 2,576-square-foot wine cave; and a dining hall, hay barn, and stables. The estate also boasts numerous waterfalls and sizable ponds (which generate hydroelectric power and produce an extra $60,000 in annual revenue), not to mention its own helipad and grassy airstrip.

Commissioned by insurance salesman J.C. Morris, this 1963 Prairie-style home on Ketron Island touts 5,310 square feet of interior living space. Nestled on a five-acre lot above the Puget Sound, the house boasts large windows, granting gorgeous views of the 1,000-foot stretch of shore below. 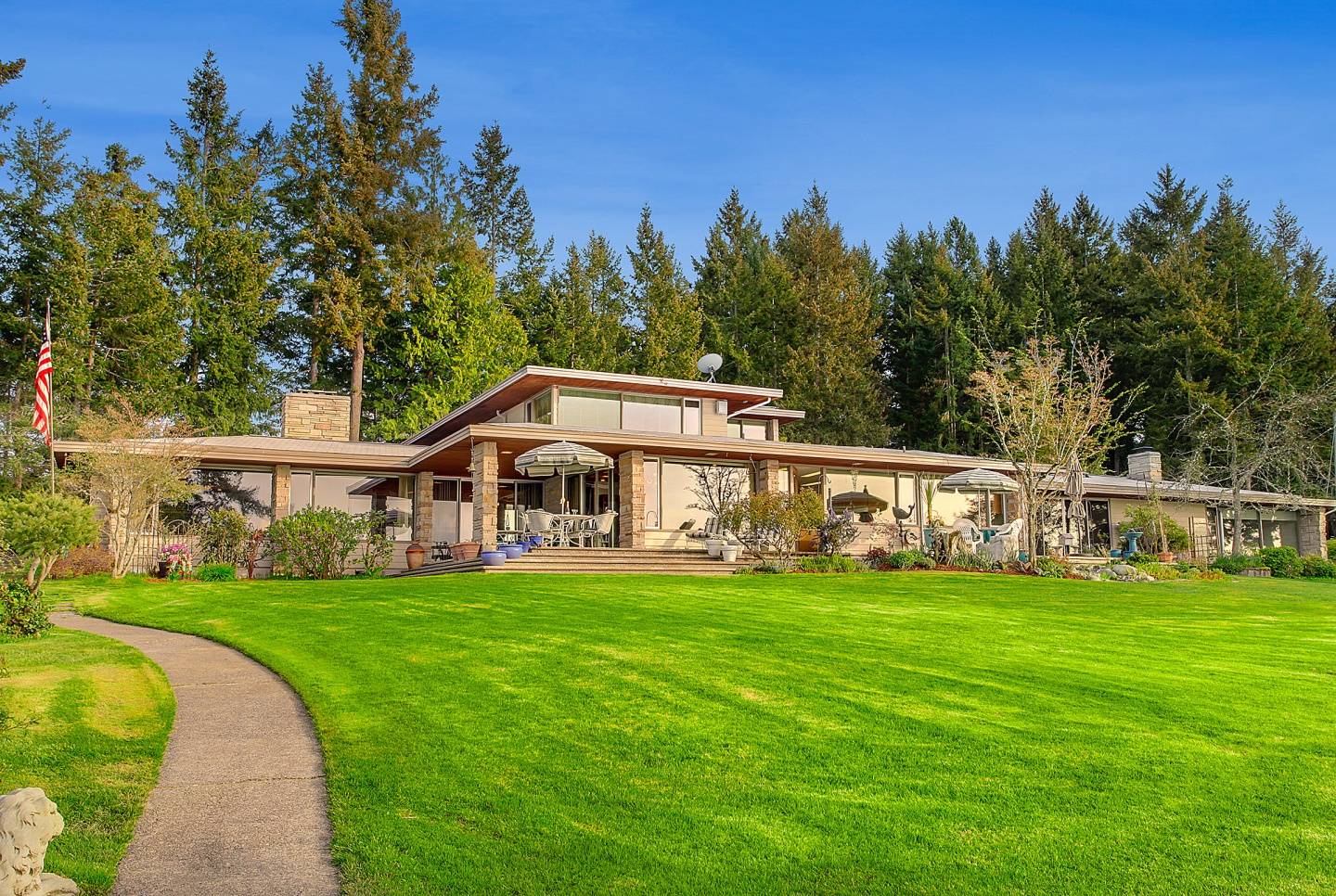 The house has four bedrooms, six baths, plus a separate guest suite on the far end of the large carport separating it from the main house. There is also a separate, fully equipped guest home complete with a deck sitting by the water, comprised of a living room, a dining rom, a den, a family room, a recreation space, a wine cellar, an eat-in kitchen, and a large laundry room. On the market for $1.299 million, the Frank Lloyd Wright-inspired estate—located 10 minutes away from town—also has a 160-foot dock to accommodate watercraft, including a ferry that ventures to and from town four times each day. 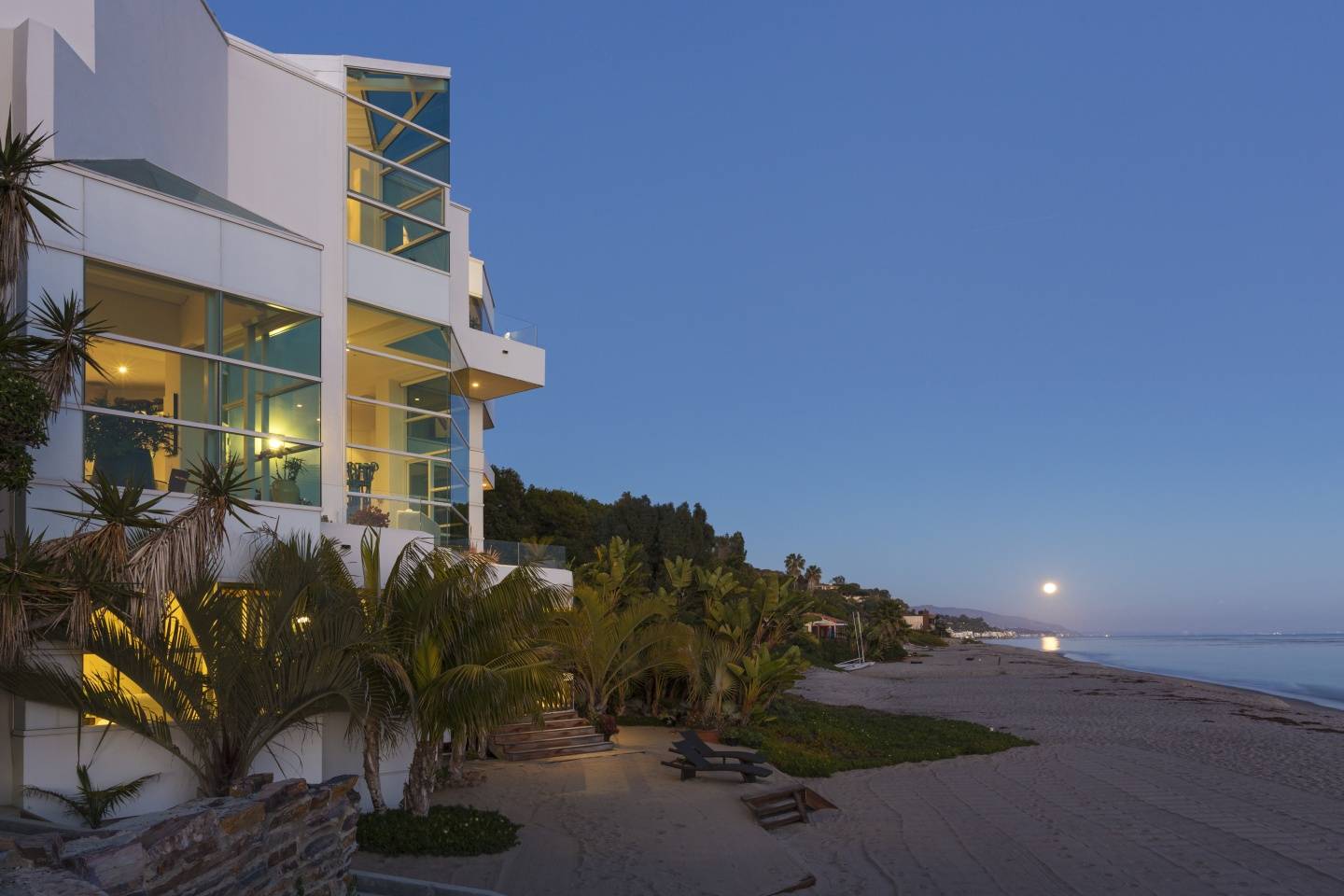 Originally desiged by Steven Ehrlich and later revamped by interior designer Michael Lee, the gated, high-end home—which showcases stunning, state-of-the-art glass architecture—has four bedrooms, seven baths, and a chef's kitchen outfitted with Gaggenau and Sub-Zero appliances, plus a large living room and dining/sitting room combo; a library/office; a wine room; an elevator; and a two-car garage. Each one of the dreamy property's bedrooms overlooks ocean views, while its master suite comes with a spa-like bath, two sizable closets, and its own private deck.

Poised a mile high up in the San Bernardino Mountains, less than 90 miles east of L.A., this massive estate—located within a gated community at the edge of Lake Arrowhead—is a car collectors' dream, featuring an 8,000-square-foot, 22-car showroom complete with a turntable. 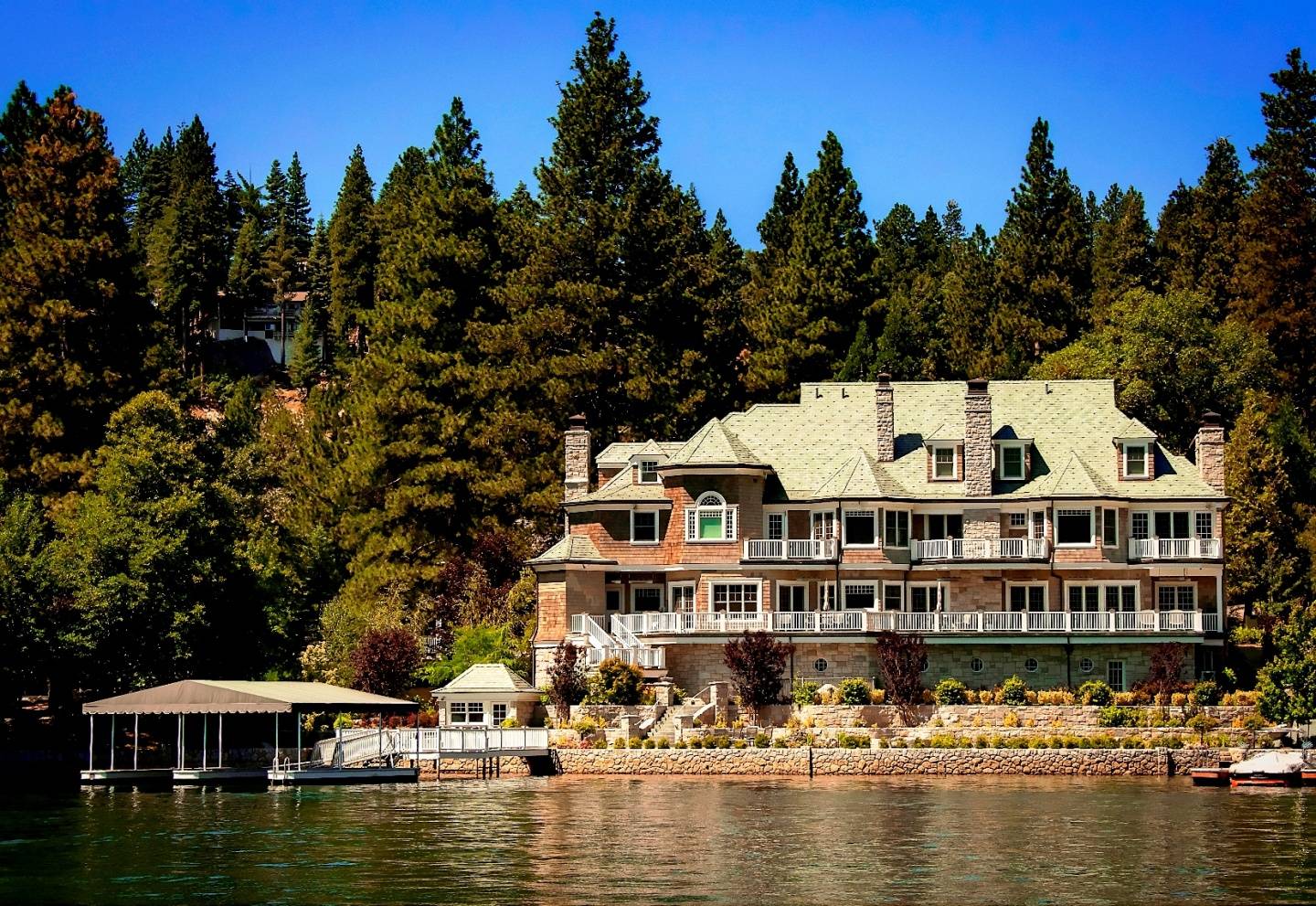 Its 16,000-square-foot main house is comprised of ten bedrooms, 17 baths, a formal dining space, a family room that opens to its kitchen, and a living room equipped with a wet bar, not to mention an outdoor deck, a den/game room, an office with a bath, a kids' playroom, and a children's bunk room and studio. Outfitted with a NASA grade, Crestron security and media system, the home—currently asking $15.9 million—also has a world-class wine tasting area and cellar with enough space to house 1,200 bottles. An attached two-bedroom maids' quarters also sits on the estate, and includes a living room, a split granite fireplace, and a full kitchen, along with a custom boathouse; two boat docks; an oversized spa; and a shuffleboard and lawn.